#WOL and #WOLweek are not a competition and have nothing to do with running. #WOL is about celebrating the open acknowledgement of an employee’s hard work in the office that may otherwise go unnoticed. Image: Pexels

We’re mid-week in celebrating #WOL (Without Limits), a 1998 film about the life of famous 1970s runner Steve Prefontaine from his youth days in Oregon to the University of Oregon where he worked with the legendary coach Bill Bowerman, later to the Olympics in Munich and his early death at 24 in a car crash.

It’s also a celebration of Wheels of Love, an upscale, four-day charity bike ride along the spectacular vistas of Israel. It spans 300 miles.

“But wait,” you might be thinking right now. “It’s Without Limits and Wheels of Love week? Is that what all of this #WOL chatter is about? That can’t be.”

Exactly. #WOL and #WOLweek are not a competition and have nothing to do with running. #WOL is about celebrating the open acknowledgement of an employee’s hard work in the office that may otherwise go unnoticed.

Didn’t we capture your attention, though? Now that you’re here, we invite you to learn a little bit more. This week marks International Working Out Loud (#WOL) Week, and Talk Social to Me is demystifying the concept, originally created by author John Stepper, in a series of blog posts:

If you haven’t heard of it before, Working Out Loud kind of sounds like you might be wandering around, talking to yourself as you get your work done. Can you imagine? Pacing around the office, muttering to yourself? Well thankfully, it’s not quite like that.

Working Out Loud is a concept that emphasizes making your work visible, for the benefit of yourself, your team, and others you might not even have considered. But what does it mean exactly, to make your work visible? Visibility in your work can be achieved in different ways. It could be as simple as having your team use a whiteboard to note what they are working on, or having daily stand-ups. Many employees in the workplace are using their company’s social platform to share information and gain greater transparency into their work. Many social employee-only platforms have the ability to create a group for your team, which is an ideal place to share what you’re working on.

What we recommend to get started:

At the beginning of the week, have everyone in your team post to a #WOL thread. In that post, list out the major items you will be working on that week. The list doesn’t have to be all-encompassing—after all, there are many things we do each week that could fill pages. Hit the main highlights of the work, keeping in mind your priorities. When writing your list, start to think about what is needed to get this work done, and note any dependencies. If there is something you need from a co-worker, such as direct inputs or even background information for your project, make note of that too. 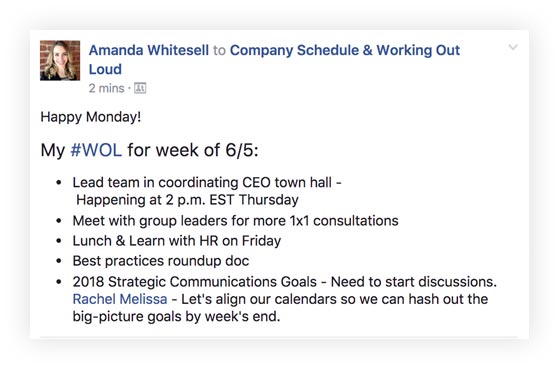 #WOL brings transparency to our work at Talk Social to Me. We never have to guess what co-workers are doing.

What does the visibility of #WOL get you?

We know—sometimes it can be scary to take that leap and make that first #WOL post. You may be thinking, “who needs to know this stuff anyway, besides my manager?” But we urge you to give it a try. Believe it or not, once you get started, you and your teammates will see the benefits both subtle and overt, and come to understand how a #WOL habit can help each of you. Providing visibility into your work is a great practice, and can lead you and your team to achieving greater success toward your goals.