You’ve got this shiny new thing called an enterprise social network (ESN). You’ve unwrapped the package, installed the batteries, read the instruction manual, and flipped the switch. Abracadabra! Poof! This thing is ON. You move forward with an awareness campaign, you train your users, and after the first few months you even have some metrics you can collect. But you still might be scratching your head, thinking, “How do I create long-term value with this thing?” Upper management is breathing down your neck, wanting to know how it’s going, and by the way, has it paid for itself yet?

Quite likely, before you even rolled out your enterprise social network, you gave considerable thought to your goals and linked them to the corporate mission and objectives. This high-level view is both necessary and useful for setting the stage to get down to the nitty gritty. But once your enterprise social network is up and running, you’ve got to really dig in and figure out how it will deliver long-term value for your employees while adding to the bottom line.

Enterprise social networks can be a hard nut to crack. Sometimes, you really just want someone to say, “Here you go, here’s the magic formula to a successful enterprise social network: [insert unicorn and rainbows here].” But in our heart of hearts, we know that no amount of “Alakazam!” or “Open Sesame!” will make any difference. One of the most useful things we can do in our quest for the “magic” is to listen and learn from others in the field. Recently, I had the pleasure of interviewing Jeff Ross, community manager extraordinaire at Humana. Humana is a health insurance company in Louisville, Kentucky, USA, that decided to pursue creation of an internal network in 2009. After evaluating many options, they settled on Socialcast and were off and running. Ross has had much success with Humana’s internal social network, named Buzz, which has shown a steady increase in engagement since the early days in 2009 and is currently at 92 percent adoption.

So, what’s Ross’s secret to creating long-term value with Humana’s enterprise social network? Based on the above statistics, this will come as no surprise: Hard work, commitment, and a plotted path forward apply just as much to your enterprise social network as they do to any other endeavor. Ross shared stories of Buzz’s inception, journey, and path to 92 percent. Here is what stood out:

Ross’s approach to growing Buzz in a smart way is to have two to three “big ideas” each year to focus on. It is tempting to try and do too much, and sometimes difficult to whittle down, but make sure that your ideas align with your objectives. For example, in the early days, Ross focused on awareness and initial adoption, and sought out teams that were interested in using the platform. Buzz never had a “big bang” enterprise rollout, which means Ross was free to pursue the “slow and steady wins the race” approach to growth and adoption, focusing on the early adopters and the places and teams that could more readily see an impact and realize value. It is also important to note that pursuing a “big bang” rollout has been shown to have disappointing results, as discussed in a SWOOP Analytics report and the Gartner hype curve. When you focus on meeting the immediate needs of targeted groups, you ensure that they will adopt the new behaviors needed to make using your enterprise social network part of their routine. 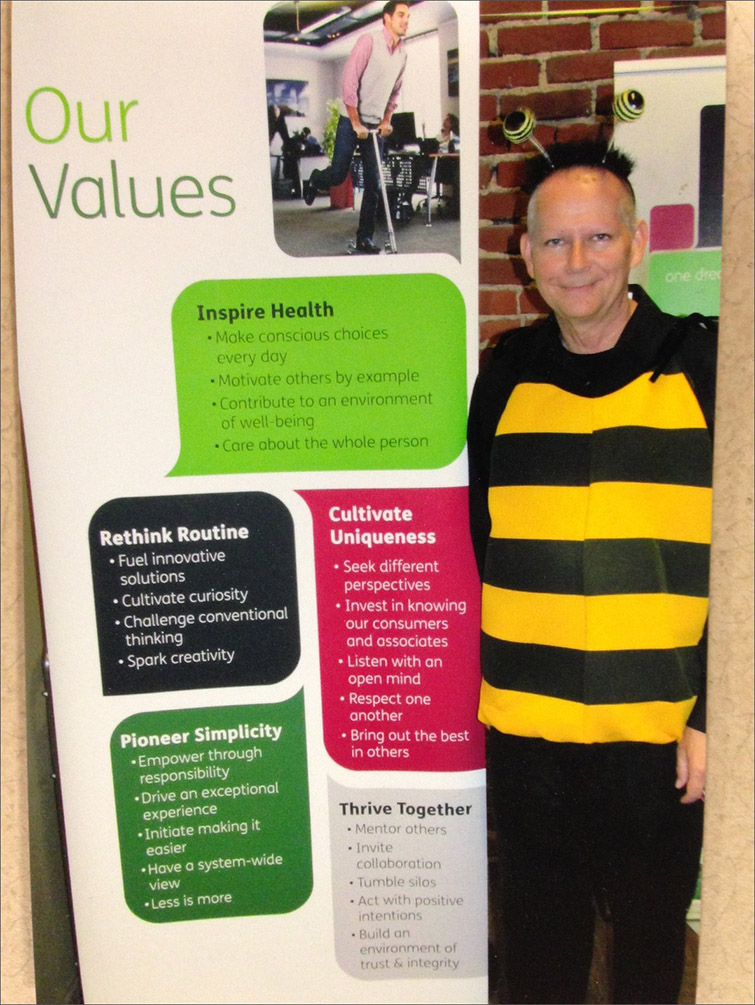 In between all that focus, purpose, and humanity, Jeff Ross makes sure to bring humor and a real presence to Buzz.

At Humana, the primary goals from the beginning were to accomplish business objectives and build positive interpersonal relationships. Notice something missing there? Reaching x percent adoption is NOT on the list. This stands out because the stated purpose of the platform is squarely focused on building value rather than hitting a certain number.

| MORE: Step beyond strict financial KPIs and consider the intangible values of an ESN

One area where Buzz has been able to drive an increase in conversations is through its many integrations—over 1,100 integrations across 10 different applications! Buzz’s path to integrations started with its primary objective—supporting employees in building better interpersonal relationships at work. How can this be accomplished? By making it easy for them. How? By integrating Buzz conversations in as many ways as possible. By making Buzz conversations readily available in other apps, employees can have relevant interactions about the work at hand and get quicker responses as well. Integration makes it convenient for employees and puts Buzz right at their fingertips in a “can’t be missed” opportunity to engage with their peers. Additionally, a live-streaming integration was implemented when Humana’s new CEO embraced Buzz in 2012. The live-streamed town halls were such a hit with employees, and “especially helpful” in boosting Buzz engagement. Not only that, but having leaders use the live-stream feature for big events has become so ingrained, that it is now the expected way for leaders to communicate.

Ross stated it was an intentional decision to allow company culture to play a big role in guiding the tenor of their enterprise social network. “The #1 topic on our network is health and wellness—when people share their success stories, it’s wildly popular,” he noted. Humana also allowed “non-work” social discussions to grow organically in their network. In the first year, these non-work—related discussions accounted for about 55 percent of all discussions. Now, seven years later, the adoption of Buzz has grown so much that non-work discussions only account for 15-20 percent of all discussions, while work-related discussions grew to 80-85 percent. When employees feel free to engage in non-work topics, they begin to feel more empowered to engage on the enterprise social network in work-related matters, leading them to feel like they have a voice in what goes on at Humana. This theme of “voice” popped up several times in our conversation. Ross underscored the importance of the role Buzz has played in giving employees a voice, and how critical that is to engagement.

Ultimately, I couldn’t help myself— I had to ask Ross, “What is that one piece of advice you’d give to people starting an enterprise social network—the thing they really must know or do?” (That’s me, looking for a magic formula again).

There was no hesitation in his response: “Have a full-time Community Manager devoted to your enterprise social network.”

As it turns out, your enterprise social network can’t run itself (I’m sure you already had a hunch about that.) But seriously, the swiftness of Ross’ response made it apparent just how valuable he found the role of community manager. At the helm of Buzz since its inception, Ross has plotted a course each year and seen the platform make steady gains in providing business value and connecting employees. Enterprise community managers typically wear many hats, responsible for the basics, such as training, evangelizing, and connecting users, to creating meaningful dashboards, driving leadership usage, interfacing with IT and other departments on integrations, and more. Without someone at the helm, where would your enterprise social network go? Hiring an enterprise community manager to strategize, manage, and guide your enterprise social network is essential to its long-term success.

Why is Humana’s Buzz so successful? Over the course of seven years, they have charted a course to steadily meet personal-level needs while providing business value. They have supported their employees in building positive interpersonal relationships by allowing them the freedom to make emotional connections on Buzz. And they’ve invested in a full-time community manager, Ross, who creates and drives strategy for Buzz, ensuring that business objectives are met. Humana’s willingness to see and understand the value of Buzz in the early stages allowed Jeff to continue on a carefully thought-out path, building value for employees and the business alike.

Melissa Rosen grew up with rotary phones with long spiral cords, quad roller skates, and TVs with rabbit ears. She still reads books, but nonetheless finds social media applications fascinating and is convinced of their value in the workplace. Melissa has worked in the enterprise social network space for the last seven years. As a consultant with Talk Social to Me, Melissa works with Fortune 500 clients to build strategic collaboration programs and enterprise social network engagement.