To prove value back to the business and to the employees who use it, an enterprise social network requires the gradual steps of a crawl-stand-walk-run methodology. How else would you approach the Yellow Brick Road? The most compelling thing about any enterprise social network is a sense of shared purpose derived from the people who are participating. People and human nature require time to build trust and create motivation. This is done by making the network an important tool that grows in value as it reaches the hands of more and more of its intended users. Gradual introductions, steps on a journey to the Emerald City are a better approach.

A Brick by Brick Approach

We’re not advocating spending years rolling out your community and collaboration program. We are, however, recommending that you take a set of measured steps that build on each other in a sequence that makes sense. Here’s an example introduction plan for a 10,000-person network:

SWOOP Analytics, a behavioral analytics company, has been mapping organizational networks for over 10 years. They caution companies against using only growth and engagement metrics in their enterprise social networks. These measures work in the early phases but do not actually quantify the value being created. In employee networks, value creation comes through collaboration, empowerment and relationships.

In a 2016 SWOOP report analyzing data from 16 Yammer communities, they compared gradual vs. all-at-once community introductions. 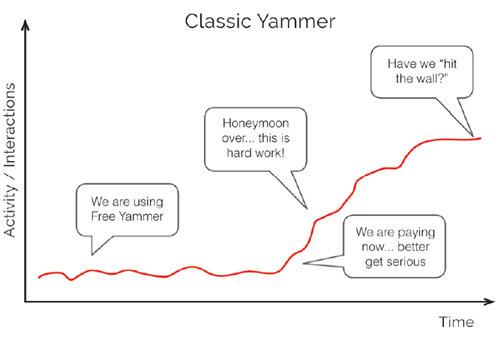 In the Classic Yammer introduction pattern above, the shift from free to paid use of Yammer was accompanied by an influx of more resources to drive engagement. After a certain point, new adoption flatlined.

In a second Yammer Hype Curve pattern (named by Gartner Group), engagement decline followed a big all-at-once introduction. Gartner calls this big decline the “Trough of Disillusionment.” SWOOP also noticed that with this method, companies had inflated expectations of growth because of the deep investment by leaders in this “big introduction.” Disillusion is a good name for what Dorothy went through each time as she and her traveling companions asked the Wizard of Oz for his help. 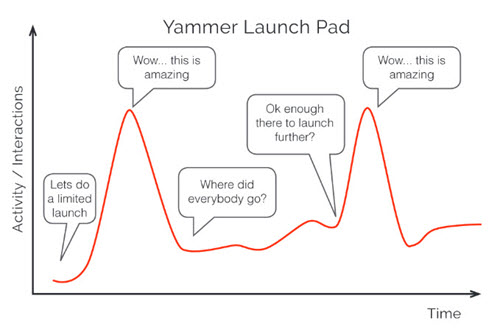 In the third Yammer Launch Pad pattern, the Trough continued to be present, but recovery from it was aided by new energy infused from the successive groups coming into the network. Gradual introduction brings the crests and troughs of engagement together in one place where you can create a sea of change as groups are cresting and falling all in one place. With this third pattern, Yammer awareness was stronger for a longer period in the minds of company leaders. Keep knocking on the doors to Oz.

Position Community in Perpetuity, Believe in Oz Like Dorothy

The language of how a social network is introduced needs to be nuanced. Unless you have generous, creative people who don’t mind investing time and energy into something that’s labelled an experiment, don’t call your community introduction (to just that early first group of users, right? Right.) a “pilot” or a “trial.”

Find other terms (and plan a gradual rollout to accompany these) that position your network to those first invited as an exclusive experience. Couple a community’s introduction with a very specific purpose (like shifting the work on special initiative being worked on by two teams) to infuse a sense of necessity and usefulness. Combining these elements will create positive first impressions, including a sense of good planning rather than engagement for engagement’s sake. As groups are invited in waves, observe patterns of uptake. How do groups in one part of the business respond as opposed to others? With each new group, you can iterate and better align to company culture.

There’s No Place Like a Valued Enterprise Social Network

Dorothy was wearing the Ruby Slippers even as she sought help from the Wizard of Oz. She had the capability to go home at any time, but she didn’t know how to tap that power until she made the effort to see and give the Wizard what he wanted. Your social network is also a learning journey. Target the most pertinent use cases and don’t be afraid to start small. Initial wins are your tools to support the long game as your forge your path toward measuring value instead of engagement.

Email us to talk about your company’s particular technology rollout needs.