You’re an internal communications professional, and you need to distribute a major announcement that needs to reach the largest number of employees possible. You know if the message came from your CEO it would garner a larger audience, but they are super busy and don’t have time to post in Yammer (even if they’ve written or approved the text). If only there was another option. If, as a Chief of Staff or Head of Communications, you had the ability to post on behalf of your CEO on Yammer using a secure method, would you be ready to do so?

Alas, you will soon have the option as a verified Yammer admin. The “post-on-behalf-of another user” update is scheduled for release in December 2020. (Note: It will be restricted to paid Yammer networks, according to a Yammer Developer Center document.)

The ability to post on behalf of another user is a top request of Yammer users. Communications professionals are eager to help shadow or ghost write posts for senior executives. The thought is that posts made from the profiles of senior leaders are more impactful.

In practice, they’re right. SWOOP Analytics looked at the impact of a CEO’s action in a Yammer community. Spoiler: It’s big! If a senior leader spends five to 10 minutes a day directly engaging with staff at all levels in an employee community, you can expect more than 50 percent increase in activity (likes, replies, @ mentions and notifications) by those directly engaged, along with a more than 100 percent increase in new interactions between those who hadn’t previously interacted with each other in the community.

At the same time, there is controversy and concern around the concept of posting on behalf of a leader. Yammer is about authenticity. Employees are eagle-eyed and can spot imposter posts written by a communications pro a mile away. Naysayers believe that posting on behalf of someone else will reduce the genuine nature of the network, and that it values reach over connection.

So why wouldn’t senior leaders want to be active on Yammer?

Often it’s not that they don’t want to, it’s that they don’t know how, or why, or make the time. Senior leaders are extremely busy, and getting them to “fit” Yammer into their day requires a permanent shift in their routine. If they’re not actively participating, they need to be coached on WHY Yammer is different (and that it’s not just another channel). That can be hard to articulate if your day-to-day is inundated with deadlines for press releases, email newsletters, and more, versus helping others to adopt new technology. It would be so much easier to just to create a message on behalf of the leader, and send them it to them for their approval, right?

We believe there are appropriate instances for using the “post-on-behalf-of” feature, but you have to have some ground rules. It’s not an easy out to make Yammer another “push” channel – the magic happens when leaders reply to others’ posts and comments, and affirm others’ work by reaching out, connecting, and actively listening. Here’s where we think you should draw the line.

Before Even Raising the Opportunity…

When it’s OK to Post on Behalf of a Leader…

The thing is, posting on behalf of leaders 24/7 challenges the essence of Yammer. Yammer isn’t just about hierarchy and “push” communications. It’s about transparency. It’s about connection. It’s about community. (Microsoft reinforced this by renaming Yammer “groups” to “communities” earlier in 2020.) Employees don’t just want to be heard; they crave authenticity.

It takes a lot of work to take Yammer from an announcement haven to a networking and social listening tool between frontline employees and decision makers. We at Talk Social to Me have made it happen time and time again. To coach senior leaders, we start with data and establish a baseline of the leader’s existing Yammer habits. Then we help to make their participation on Yammer concrete. It starts at the top.

In conclusion, the “post-on-behalf-of” feature’s release nods to the importance of having a message come directly from a leader on Yammer. It also represents the struggle many organizations face in getting senior leaders authentically active on the platform. With some work, and a little convincing, communicators can coach their senior leaders to change their habits and participate authentically. If you’re going to use post-on-behalf-of, establish clear guidelines, and use it only when needed. Don’t use it as a crutch.

For help activating senior leaders at your organization, Talk Social to Me can help. Contact us. 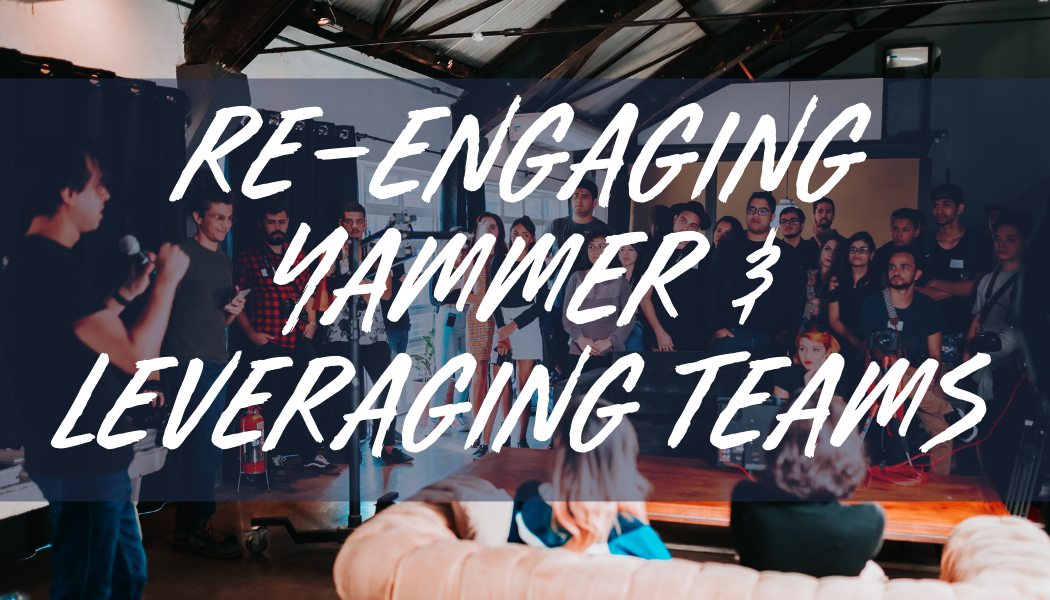